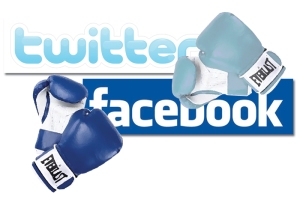 In a world dominated by social media, sacrifices have to be made, only the best can survive. Even with the obesity boom in this country we still haven’t found a way to have our cake and eat it too.

At one time the different options of social media could have been seeded bracket style and the field would have been just as large as the NCAA tournament. For the sake of continuing that theme I think its safe to say we’ve arrived at the National Championship. Facebook vs. Twitter.

Its a heavyweight bout of two #1 seeds.

Coming out of the South region Facebook was untested in its route to the Championship. The ability to stalk old ‘spring break’ albums of the girl you never stood a chance with, and the sheer convenience of hitting on her over inbox soared Facebook passed MySpace in the Elite 8. MySpace in all fairness never stood a chance, despite a few perks it was never able to overcome all of the spam, and downright creepiness of its creator, “Tom.”

Instagram appeared to have a shot at the upset early in the final four contest, but ultimately fell, thanks to the users who post pictures of their throw pillow arrangement and 14 consecutive duck face selfies.  In the end, too few people give a damn about the majority of the pictures they see on Instagram, and Facebook is just a tad more creeper friendly.

Blowing through the Midwest region Twitter has taken the world by storm. Just when people thought Facebook couldn’t be beaten, Twitter emerged as a contender. Not only can you stalk the lives of your favorite celebrities, but it also made updating your status 100 times a day totally cool and acceptable.

People always want what they can’t have, and that 140 character limit drives Twitter faithful a good kind of crazy. We know this, because people will butcher their tweet with atrocious grammatical errors to fit the 140 limit before they’ll go over to Facebook and type the same thought out entirely. And they do this knowing that on Facebook 1,000 friends will see it, and on Twitter its more like what, 400 if you’re popular? Thats love.

We all know why Twitter has become the most popular lets be honest, the reason is obvious. The parent infiltration numbers are substantially lower. Every parent has a Facebook now, hell some of ’em even share one account. We’ve all seen ’em.

“Paul and Sherry Timmons commented on your status.”

Seriously, parents are not only on Facebook these days but they’re the driving force behind its relevance. Once upon a time your notifications reveled who had a crush on you and couldn’t get enough of your stuff. Now they just reiterate that your parents “like” everything that you do.

People still seem to respect their parents however, thats one good thing thats come from this. I believe its that fear of parental disapproval that has people my age cleaning up their act on Facebook. Everywhere I look Facebook profiles today are chalked full of family oriented pictures, statuses that show off political intelligence or the direction of that person’s life, and are only updated every so often.  Ya know, the portrait of a low-key, respectable, career driven individual.

That same person on twitter tweets every five minutes, follows sexually explicit accounts, and is doing a keg stand in their profile picture. Girls are very much included in this, the gal sittin’ on her daddy’s lap in her Facebook profile is doing the same thing in her Twitter avi. Only on Facebook it’s her actual father.

I don’t know maybe I’m just bitter at Facebook because nobody cares about my profile anymore. I got over a 1,000 friends and I can’t get more than 6 likes no matter what I post on there. I guess that means I really only have 6 friends, which now that I think of it–is 5 more than I can name so I guess I’m doing alright.

Of course, my low numbers of notifications would be a lot easier to cope with if every girl who changes her profile picture wasn’t getting 200 likes and 32 comments. I could send out a viable solution to end world hunger and I could only count on my personal fan club-or in other words.. my parents..to like it. What gives?

It’s a scary time to be a red head I tell ya. In a world where bad parts of history start to repeat themselves, I fear the worst for my band of ginger top brothers. It’s of my possibly moronic opinion that we redheads could be journeying down the wayward path of injustice. The oppression is real.

Our pale skin, carrot colored hair, and multitude of freckles have made us a pretty hilarious punch line over the years, and that’s how it starts. But punch lines turn in to common phrases, and before ya know it you’re describing mis-treated panty wastes as “redheaded step-children.”

Propaganda in the form of outrageously funny episodes of South Park pushes it to the next level, and in the blink of an eye national opinion promotes inequality. In our case, we are way passed unequal, we’re hardly human-we don’t even get souls.

All jokes aside (but not really) people call me a ginger all the time, and its never bothered me. Seriously, I’ve been called a ginger many times by many different people. Mainly the disgruntled girls I was hitting on. It just never carried with it the same sting as my inability to go outside without sunscreen.

Really, when you get called somethin’ so many times it not only loses its luster, you get used to it. I’ve thought about adopting it and having one of those cool hyphenated last names. It would have made taking attendance in school so much more entertaining.

Would have been worth it just to see the look on my classmates faces.

In all seriousness, if you wanna call me a ginger go ahead, its over-used and unoriginal. Just beware, you are 1 minor switch of 2 letters from sayin’ somethin’ far less socially acceptable.